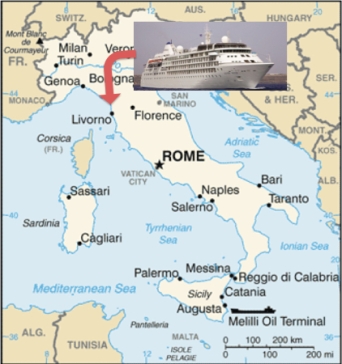 Ah, Italy… how nice it was to finally be back in one of my favorite countries for the first time in nearly twelve years!  Livorno was our first port of call in a long list of Italian ports, not much to really donear the port, but Livorno is a great starting point to make the trip to Pisa as well as Florence.  When I was last in Italy, I was sixteen and visiting various Italian cities with my high school choir.  Go Chamber Singers!  We visited Milan, Rome, Florence, Sorrento and Venice.  One of my favorite places in that short trip was obviously our visit to Florence, a spectacular city filled with beautiful architecture, history, art and… shopping! So I was thrilled at the chance to back, as a full-fledged adult this time!

The first thing I noticed about the port of Livorno was how huge it was.  I’ve never been in such a complicated port before!  It seriously took us about fifteen minutes of driving to get  out of the port area.  Wild! After arriving in Livorno, Krystle and I met up with one of our recently disembarked crew members, Marin, who had driven with a rental car to meet the ship.  So off went the three muskateers on an adventure to Florence! It was a nice drive through some beautiful scenery, and once we arrived in the city we found a garage and ditched the car for fun times on foot.  Of course, one of my first stops was to the Ponte Vecchio, where I took my picture for a good memory and also in honor of my solo in the opera show, “O Mio Babbino Caro,” which mentions the Ponte Vecchio by name. After the picture stop, all three of us were quickly fading from low blood sugar, so we found the most amazing sandwich spot right on the street, I Due Fratellini, where we had unbelievably delicious [and cheap] sandwiches and red wine. Yes please! Then off to the Uffizi Gallery, where every major artist rolled in their grave as we walked through the museum, blasphemously narrating the inner voices of all the works’ characters.  I was going to give some examples, but let’s just say that our jokes were extremely inappropriate, NSFW and… hilarious.

And of course, it was SAINT PATRICK’S DAY! Two Americans and a Croatian drinking green Irish beer in an Italian bar while looking out over the plaza where a demonstration for Syria occurs. Total normal thing to happen, right?

Oh, and a quick evening trip to Pisa!  I had never before seen the leaning tower, so this was a great little treat for me.  We did our best with the forced perspective tricks… well, the best we could for taking pictures at night.  I was quite proud of our uber original thinking.  I mean, who would ever take a picture like this, right?

Back to reality and current time for a moment.  I had the most amazing time visiting Travis down in West Hollywood.  We did pretty much everything on our list: two different hikes, shopping, more shopping at the outlets, I got a tattoo, we went to the LACMA, to the Getty, to a friend’s place for dinner, to a picnic in the park, flea market shopping, drag queen bingo… which I won! Never underestimate the power of a good visit with siblings when you’re back from a cruise contract. And now I’m back up at the parental unit’s home in NorCal, had a nice visit today with some of my Choozi friends over in Redwood City who are currently rehearsing the newest casts for the Whisper and Shadow. Tomorrow morning will be a fun hike up Mount Diablo, and then I need to start figure out how I’m possibly going to get all my new purchases, plus my CAT, back to New York on Sunday!

When God wants to acknowledge all your hard work in the vegetable garden, but make you feel better about not planting flowers, you end up with a volunteer pansy in the parsley. #seedmixup #thanksgod #gardening #ucdavisplantsale
Faceless and fearless. #kmart #bigstoredemise #creepy #mannequin
The MOST giant weed. #weeding #mulching #happyplace
Every time I come here I am SERIOUSLY inspired by all these badass humans. Thank you, @onehousebakery for being such an awesome force in #benicia!!!