And so begins the series of port updates… 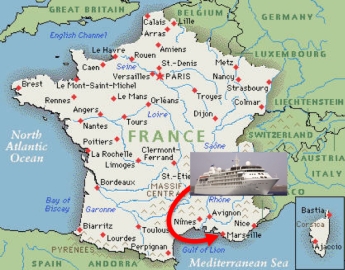 We arrived in to the commercial port outside of Marseille several hours late because of weather delays, so it pushed back the arranged tours for the ship by a few hours.  Nevertheless, this was my ONE day in mainland France on the ship (we made our way to the island of Corsica later), so I had to make to most of it and went out as an escort to visit some highlights of the city of Marseille.  It was nice to see the main cathedral that overlooks the entire city, but I think I might have been a little happier just finding a peaceful cafe and enjoying some late lunch with friends.  I never really make a big stink and complain about guests, but let’s just say… we had a “special” person on this particular tour who needed lots of “things” and special “attention”, probably because she has lots of “money.”  I will not digress down a torrential negative path, because at the end of the day, this is all just comedic material for me.  So I made it out alive at the end of my tour, taking extraordinary pictures like this

After the tour, Krystle and I headed out for an “adventure” – some thing we liked to do as often as possible.  But the weather was super chilly, the shops were mostly closed by the time we got out to the city, so we stuck to a simple dinner instead.  Our plan was to eat some of the famous Bouillabaisse that Marseille is known for, but most restaurants were offering it for 30-40 Euros.  So we got burgers instead.  And damn were they good!  The last failed moment in our Marseille Day was our shuttle bus driver refusing to leave on time from the shuttle stop, so we got back to the ship fifteen minutes late to our crew curfew.  Oops!  No worries – Kathleen got it all on video – the bus driver refusing to leave on time.  Kathleen – can I get a copy of that video for the blog?  Might be interesting material!

Okay, gotta run, Travis is insisting that we do avocado masks RIGHT NOW.