Last week, I had the great pleasure (and pain) of spending some time (and money) at a few great hang-outs in New York City. Thought I would share my experiences and convince newcomers…

kday. I had been here a few times before, on Saturday nights when the place was so packed that cocktail servers could barely get by with a tray full of martinis. This time, I met up with girlfriends on a Thursday night, for some after-work cocktails and small plates. When I first arrived, I was endlessly amused by the fifty or so female patrons. Note to guys – GREAT place to pick someone up on a weeknight. Verlaine also displays extraordinary artwork, plays great music, and has fantastic service. But the real reason we came? $4 Hanoi Lychee martinis, Sangria, and Vietnamese Bloody Marys, as well as 2 for 1 beers, and $4 wine/cocktails. Our waitress kept the Lychee Martinis coming until happy hour ended at 10:00pm. Did I mention their happy hour is every day of the week? And while vodka plus sugar is not a force to be reckoned with, food on the side is highly recommended. Try anything from the eclectic Southeast Asian menu, which offers summer rolls, five spice calamari, and curry puffs.

Thor 107 Rivington Street
Directly across the street from Verlaine, this modern hotel (Thor = The Hotel On Rivington) has a beautifully hip lounge on the first two floors that prid 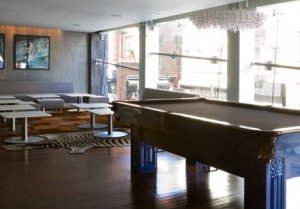 es itself in overly expensive drinks, busty waitresses, and a sometimes annoying crowd. But who can complain while sipping Absinthe, playing pool, and looking out over all the neighborhood? The architecture in this place is [obviously] fantastic. After Verlaine’s happy hour, we stopped by and met a promoter for French Absinthe, who insisted on mixing free drinks. The upstairs area of Thor doesn’t get much love from the ‘hood, maybe because of the difficult passage (walk past hotel employees to the elevator going up). When we arrived, we were the first women – and actually, the first Americans. After being bestowed the lovely green bevs, we utilized the antique pool table in an epic game: three 20-something American women versus three identically clad Frenchmen. This is certainly a place to go for its views over the Lower East Side, so I would recommend only staying for one drink (unless they’re free).

Kush Lounge 191 Chrystie Street
If you feel like a quick trip away from Americans, look no further than Kush, jus

t a short walk from Rivington Street. After leaving Thor, we were tipped to mingle among the international crowd and sexy décor of this Moroccan lounge. Kush is one of the places you would never know existed unless someone let you know. The outside of the venue is completely inconspicuous – in fact, we had to ask a few people outside if the place was actually a club before we passed through the heavy doors. The interior transports patrons to an exotic Arabian atmosphere, complete with hidden nooks and aromatic hookahs. I’m nearly positive that we were the only Americans in the place. In fact, nearly half the crowd was smoking cigarettes and cloves inside! I’m not quite sure of city regulations and indoor-smoking – they obviously are permitted to have hookahs, but… cigarettes? Well, our $30 apple-flavored hookah was completely worth the smelly clothes afterwards. I highly recommend checking this place out on Tuesdays, Thursdays, Fridays and Saturdays when live DJ’s spin.

Art After Dark at the Guggenheim 1071 Fifth Avenue (at 89th Street)
New York City is filled with art, culture, and music. Why not combine all three into a fantastic event? I live a few short blocks from “Museum Mile,” a stretch of Fifth Avenue so-named for the numerous museums residing among multi-million dollar penthouses. On the first Friday of each month, the Guggenheim Museum transforms Frank Lloyd Wright’s masterpiece into a sort of… club?

Admission is $25 (cash only) and this place gets PACKED, so plan to be there well before the start time of 9:00pm. Most of the crowd seemed to be in their mid/late 20’s or early 30’s, and all guests were acutely aware of the astronomic art surrounded the atrium on a spiral staircase. Cai Guo-Qiang currently has an exhibit at the museum, entitled “I Want To Believe,” which features an artistic simulation of a “car-bombing.” The main atrium of the museum suspends nine identical cars as if falling from the ceiling, complete with fiber-optic pulsing lights. (This only translated the “club” vibe further.) Whether or not you make it to one of the First Friday events, all New Yorkers should visit Guo-Qiang’s exhibit. Check it out on Fridays from 5:45 – 7:15 pm when tickets are “pay what you wish.”

4 thoughts on “Some notable evening destinations in NYC…”